Keep Austin Weird: Top 10 Ways to Get Weird in Austin 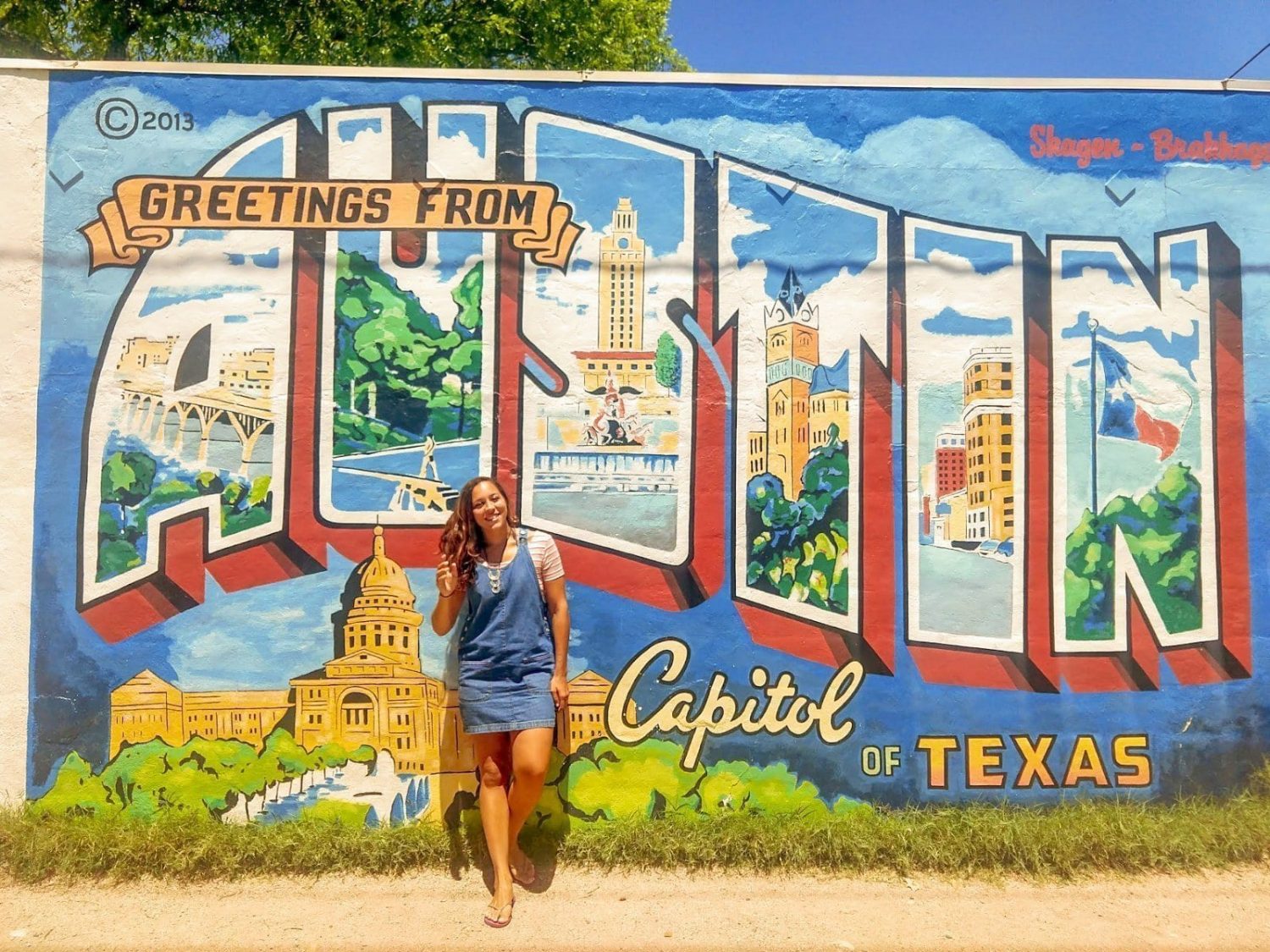 Get weird in Austin! Austin, Texas’s unofficial slogan is “Keep Austin Weird”.  A slogan coined by a local radio station legend, hippies and old-timers alike used this as a battle cry to fight commercialism and the rapid overdevelopment due to the soaring population from tech giants adopting Austin as a new home.

Heading to Austin I was excited for a city that embraced the unconventional and defended its local businesses and quirks.

At Congress Bridge, during summer evenings for bat season tourists flock to see the largest urban bat colony fly for their nighttime hunt in Austin. It is maybe the weirdest thing I have witnessed in a city in America. Hordes of tourists on the bridge waiting for a cloud of 1.5 million bats that could possibly poop on them. Here is a bat guide for the bridge so you know what to expect!

While the infamous Hope Art Outdoor Gallery is sadly closing, due to the rapid development of Austin. Austinites still love their murals and street art! As you walk past any business you will see how local businesses have paired with local artists to create a colorful city.

“You’re My Butter Half”, “Greetings From Austin”, “I Love You So Much”, and “How You Doin?” It is impossible to not catch yourself taking a photo in front of one of these Austin iconic images. South Congress Street has a high concentration of these murals and on any weekend you will see some people lining up to take a picture!

3. Cool off in Barton Springs and Escape the City in Zilker Park

During the summer in Austin, temps can reach above 100 degrees Fahrenheit. So, cooling off in Barton Springs is one of the ways locals escape the hot tar of the city streets. It costs $3 for locals, so if you want to save money say your local because no one checks or pay the $10 entrance.

4. Go to a House Party on Rainey Street

A nightlife area of old houses that have been converted to bars and hosts some of the wildest parties in Austin on the weekends. Avoid the weekends though if you want to steer clear of Bachelor and Bachelorette parties. Otherwise, come here for an eclectic mix of people, bars, and to enjoy the good weather by grabbing a lawn chair!

My favorites included: Unbarlievable, Handlebar, and the Container Bar ( yes it is a bar of old shipping containers!

The most Austenite thing you could probably do in Austin is be lucky enough to attend Eeyore’s Birthday Party! Yes, Eeyore from Winnie the Pooh. On the third weekend of every April locals, hippies, and tourists alike gather in Pease District Park to celebrate and raise money for nonprofit groups in celebration of Eeyore’s birthday. People dress up in wild costumes, body paint, have drum circles, participate in Maypoles to celebrate spring, and in general celebrate life and Eeyore! There are also local bands that play throughout the day. This party definitely is keeping Austin weird!

6. Find any type of Bar or Person out on 6th Street

With a Mardi Gras vibe, and more bachelor/ette parties then you can count 6thstreet is one of the largest streets filled with bars, live music, and late-night bites. People are friendly, the live music is amazing, and there is never a dull moment. There is always something happening on 6thand be ready for some interesting surprises!

7. Kayak Austin’s Lady Bird Lake (which is actually a river)

I don’t know why they name a river a lake, but they do in Austin. Just one of the many things that make Austin a weird unique city that you cannot help but love. For $20 USD I rented a Kayak for 2 hours and discovered the beautiful green suburbs of Austin. I rented my kayak from Texas Rowing Center. There dock as well as their service was impeccable and friendly.. Also, from the river you could see the Austin skyline. Lady Bird Lake was named after former First Lady Lady Bird Johnson passed away. She was known for beautifying the countries cities with green space, such as the miles of trails and parks that surround the lake (really the Colorado River). I know weird!

I love Whole Foods and was pleasantly surprised to find out it was founded in Austin, Texas! So, come here to find the flagship store and relish in all things organic! Honestly, I love grocery stores in the USA and this one has to be one of my favorites. There are so many choices. This store is wonderful it includes a smoothie bar, roof terrace, giant salad and hot foods bar, and instore restaurants, such as a sushi bar!

Oh so many choices for some good ole Honky Tonk in Austin, Texas. Put on your cowboy boots and head to one of the many country western bars in the city, such as Little Longhorn Saloon or The White Horse. With live music, dancing lessons, and old timers a like, there is nothing more Texas than a little Texas Two Step. Check Visit Austin’s round up of the best Texas Two Step bars in Austin here.

10. Austin is the State Capital

Oddly enough Austin is the state capital of Texas, but it feels a world away from Texas cities, like Dallas, Plano, and San Antonio. It is a funky city, that wants to stay weird and do things on their own terms. Come to a city where graffiti is legal, you can go topless to a public swimming pool, and tacos count as breakfast. This is Austin and it is definitely weird ( in the best way possible)!

Basically one of the quirkiest cities I have been to, Austin, Texas is an interesting melting pot of artists, musicians, techies, foodies, ranchers, and one thing they all have in common is wanting it to not change by “Keeping Austin Weird”.

If you want to make a road trip check out Dallas, Texas and see truly how different Austin, Texas is to the rest of the state.