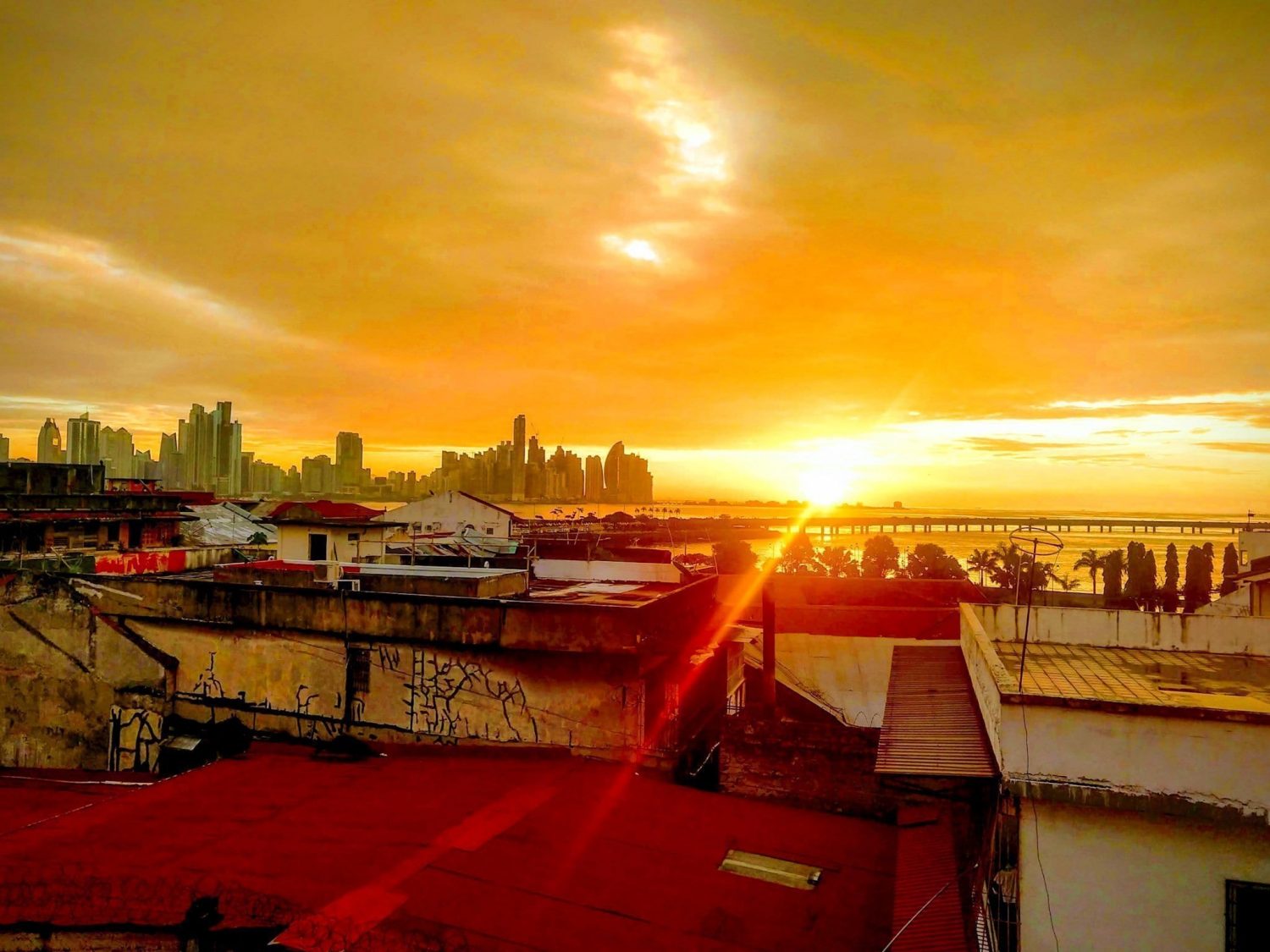 Originally when I thought of Panama City and Panama, all that came to mind was the Panama Canal. I didn’t expect to find one of the most beautiful countries with the richest biodiversity in the world, amazing beaches, and mouthwatering food. I originally booked a ticket to meet up with a guy that I liked. A friend from Couchsurfing, and thought checking off another country off my list would be a perk. (Learn more about Couchsurfing here!) While things didn’t work out with the guy, I found a new country that I absolutely love with friendly people! Panama is a country that had more than I could see in just the 10 days that I had booked. Suffice to say I will definitely go back one day.

Panama has been at the center of shipping and trade since the creation of the Panama Canal in 1914. However, in recent years it is a tourist hot spot. Especially popular among Americans, due to cheaper flights and more USA retirees moving here. My round trip flight from Florida to Panama cost less than $200 round trip. So my decision to jump at the opportunity to see a new country was easy.

With some quick research on the plane in my Lonely Planet Guide, and a accommodation booked, I was ready to explore. I stayed a few nights at Selina in Casco Viejo and I was in for a pleasant surprise. The city was awesome, but I believe the true gems of Panama are found in the jungle and on the beaches. There is the well-worn and worth visiting tourist trail of Boquete, Bocas del Toro, San Blas, and Panama City. While I was only able to hit up 2 out of the 4 during my time in Panama my experience and information that I gathered will definitely be useful in planning your trip. Here are some of the highlights from my trip to Panama and part 1 to my ultimate guide to Panama. I did not know what to expect when my plane arrived in Panama City, Panama. I had not really seen many photos, and most of my friends had never been before. The first thing I learned to my delight was Uber was in Panama City, Panama, which was amazing since most things I read said the taxis were nightmarish in overcharging tourists. I love Uber when traveling for this reason, everyone gets a fair fare!

As we drove closer and closer into the city, I did not know when the downtown began, because all of the skyscrapers that were lining the coast stretched as far as the eye could see. Panama City was looking more and more like a tropical New York City, and seemed much larger than Miami. So, with all of the giddiness and butterflies of a first date, I embarked on the city. My first stop, Casco Viejo.

What to do in Panama City, Panama?

This was a question I had right when I hit the check in desk at the artfully designed Selina Hostel in Casco Viejo (the old city). I was not expecting such an enthusiastic response and expansive list of things to check out, but I was happy that I would definitely not be bored during my stay in Panama. Here are just some of the great suggestions they gave me for my time in Panama City, Panama and what I thought was definitely worth a shout out!

My favorite part of Panama City was Casco Viejo, but if you came here 5-10 years ago this part of the city was run down, much tougher, and not where tourists would necessarily be hanging out. However, recent efforts by the Panamanian government have caused a surge of investment, renovation/restoration efforts, and now the cities nightlife and tourism is centered around this beautiful and quaint part of Panama City.

When I talked to my local friend she seemed to really enjoy the area and revitalization that has come to Casco Viejo. I do think that it is great to see this historically rich neighborhood get an uplift and the tourism it brings is helping a lot of local businesses.

Casco Viejo is a UNESCO World Heritage site, and with that comes a lot of beautiful architecture and history that will keep you on your toes while roaming around the old city. If you want a tour the only official walking tour I found was run through my hostel Selina. However, with placards everywhere you can easily do a self-guided walking tour.

While there is a Panama Canal Museum in Casco Viejo, I recommend heading to the actually Panama Canal to see the world-famous canal and Miraflores lock visitor center. Here there is a museum that tells you everything you need to know and you can check out the giant ships pass through the canal’s lock system. While the $20 USD may seem steep, but to me this is one of man-made wonders of the world and it was cool to see the Miraflores lock at work.

Pro Tip: Check the schedule of ships coming through, the worst thing would be to arrive to an empty lock. Also, take an Uber here so cheap like $6 USD each way. Cheap compared to the overpriced tours that go here.

A magnificent multifaceted brightly colored museum, Biomuseo designed by Frank Gehry showcases the rich biodiversity of the Central American isthmus that connects two continents. Fun fact Panama has more species of birds, amphibians, animals, and insects than Canada and the United States. The Biomuseo 44,132-square-foot and 6-acre biodiversity park there is a lot to learn and explore.

Visit the Golden Altar in the Church of San Jose

Is a beautiful golden altar that has been around Panama City as long as Panama. Originally it was in Panama Vieja, but to save it from being sacked from Pirates priests had painted it black to hide the gold from the pirates the legend says. From the outside of this unassuming church you would never know the riches that are housed in the Church of San Jose, one of the most visited sites in Casco Viejo.

Have lunch at Super Gourmet in Casco Viejo

Super Gourmet is a deli with a Panamanian twist. A great and affordable place for lunch as compared with most places in Casco Viejo. Also, there is WiFi! I had a sandwich and soup, mainly because my stomach was not feeling the best but boy was it good. Also, they had iced Frappuccino coffees that were good to cool off from the extreme hear.

Walk down Lover’s Lane and shop the Indigenous Craft market

In Casco Viejo, my friend in Panama showed me the most wonderful vine covered walkway along the edge of the water called “Lovers Lane”. Just like the name suggests it is romantic at sunset and during the day it is filled with vendors that you can fill your bag full of Panamanian souvenirs for your loved ones.  It is definitely worth a stroll during your visit, whether you have a lover or not.

The spot to be for nightlife for tourists and locals alike is the rejuvenated Casco Viejo, with more rooftop bars and restaurants than I could count there are choices to keep you busy for days. Three of my favorite rooftops included, Selina’s Hostel rooftop, Tantalo Rooftop, and Gatto Blanco.

Explore the modern architecture and skyscrapers of Panama City

Panama City is the Latin American Miami, it has some of the most unique skyscrapers that I have ever seen. While in town it is worth to take a stroll through the new part of the city. It truly is an amazing city, where you can see a 16thcentury building next to a modern skyscraper. The F and F tower and skyscrapers, such as The Bahia Grand Panama a beautiful JW Marriott. With world renowned architecture and culture, Panama City is definitely worth a walk along it’s waterfront to appreciate the views.

Go to the Fish Market and get fresh caught fish cooked in front of your eyes!

Mercado de Mariscos or the Fish Market in Panama City, Panama is a seafood lovers dream. The market lies at the foot of the historic Casco Viejo. Whether you want to go to the proper fish market and buy freshly caught fish, or you can go to the market where the restaurants are and have delicacies’ like ceviche, lobster, and other seafood Panamanian specialties. Here is more info for the times of the Mercado here.

Hike in the center of a city

Panama City is the only city in the world to have a jungle within its city center. The many trails through Metropolitan Natural Park offer exotic wildlife and give you a taste of the natural wonders of Panama.  The cool thing about Panama City is the number of parks and greenery close to the sprawling concrete jungle. While in the concrete jungle of Panama City you can actually hike in a jungle close to the city center and Casco Viejo.

Where to stay in Panama City, Panama?

While I could stay in a place like San Blas for days, it is possible to get to this group of islands in a day and back from Panama City, Panama by tour in a day. What is San Blas? Owned and inhabited by the local Guna Yala indigenous tribe, the San Blas Islands have been protected from over tourism by the local people. (Part of the reason it is difficult and expensive to get to) It takes about 4 hours each way to get to San Blas and costs about $100 USD round trip. Check out A Passion and a Passport’s experience here.

Soberanía National Park to be one of the best birding sites in Panama. The park is home to 525 species of birds, 100 species of mammals, 55 species of amphibians, and 80 species of reptiles. While there are many pricy tours to this jungle paradise, only 45 minutes away from Panama City center. It is possible to organize private taxis there. However, for ease, comfort, and a guide through the forest take a tour. My hostel Selina, offered tours that were not outrageously priced. They pick up in Casco Viejo and dropped you back off at the end of the day. After a sweaty and hot trek the comfort and ease is much appreciated. Check it out here!

While Panama City, Panama is amazing. There are plenty of day trips to keep you busy. If you have more time to explore this beautiful country be sure to check out my Part 2 Guide for Panama on Bocas del Toro COMING SOON! By far one of my favorite island destinations in the world!