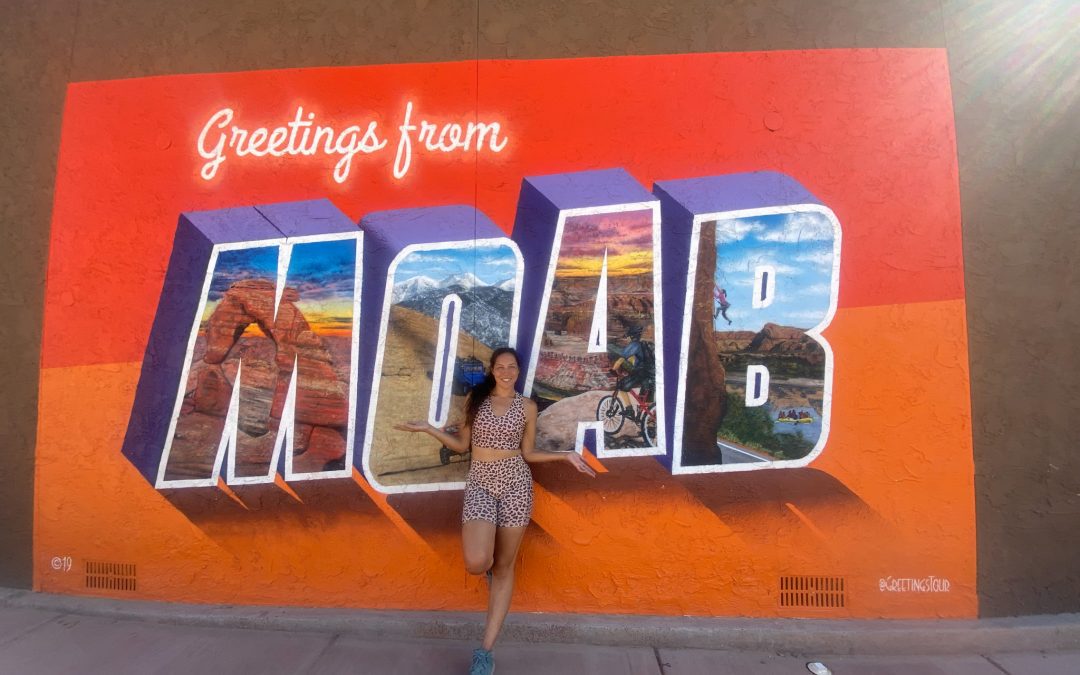 Among adventure travelers, one of the most intense adventures and experiences is a road trip through Utah. Utah in many parts looks like another planet. However, there is one town that is deemed the adventure capital of Utah- Moab. So whether you are completing the Mighty Five, or you just have a long weekend to kill, then Moab must be on your list of places to visit in Utah. There are so many things to do especially for adventure travelers of all levels and the food options are pretty good as well. It is quite a unique little town and serves as a home base to many that love to explore the great outdoors in this part of the world.

It has an artsy vibe as well, with several shops that display art work from local artists. The area is beautiful a mix of desert, and the gateway to the magnificent red rock formations and buttes that dot the area and entrance to National Parks like Arches and Canyonlands, as well as local sites and state parks like Dead Horse State Park. There is one thing we can thanks for the beauty of the national parks in this region and that is the Colorado River and the process of erosion. But I am not a scientist.

Visitors can come to the area all year long, but the best times are in Spring and Fall, since there is some snow in Winter and the area is very hot and dry in the summer. While the population is just over 5k+/-, the 3 parks noted above can have over 3 million visitors a year. Moab is a great location since it is only about 4 miles from Arches National Park, just off US 191, and it is reported to be called the “Outdoor Capital of the World”. The majority of the activities are centered on the great outdoors, including hiking, mountain biking, river rafting sports, off-roading and jeep tours, etc. Camping is widely popular with various dispersed camping sites some only $10, and BLM land throughout the area which allow for free camping.

History and Best Things to Do in Moab, Utah

Moab has an interesting history and similar to other towns in the southwest, largely tied to the path that people used to head out west and the railroads that brought more awareness to the area. The town was settled in 1878 and was the crossing point for the Old Spanish Trail from 1829- 1850’s with the Latter-day Saint settlers started up a trading post in 1855. The railroad at one time did come through the area but later changed to a different town. It was then agricultural and later mining were the primary industries. In the early 1900’s uranium was discovered in the area and was mined especially when nuclear weapons were developed and was helpful during the build-up of the Cold War, but similar to other areas that died off and the mines closed.

Another great industry has really helped the area with the growth of films. Directors like John Ford in the 40’s loved to use the gorgeous area to film movies, especially those with John Wayne that took place in the area and in Monument Valley. Other famous movies filmed in the area include Thelma & Louise, City Slickers, and 127 Hours with James Franco to name a few.

The opening of the two National Parks in the 1960’s help bring life back to Moab after other industries like the railroad, mining died or relocated. Come explore Moab that currently is flourishing and becoming a second home to more residents.

Museum enthusiasts may like to go to the Moab Museum to learn more of the history and culture of the area. The Red Cliffs Lodge also has a unique Film Museum with a short film that we enjoyed watching.

Moab’s elevation is approximately 4,000 ft so be aware. Some of the cliffs / mountains may increase the height so keep track if altitude bothers you. Hikes can be hot and exposed with no shade, add in the elevation it can be a much longer hike than you thought. I loved my hike to Corona Arch though and it was a great break to the national parks in the area and for the most part it was flat.

There are quite a few places to eat, drink or have coffee in town. For the most part, we were here to see the parks and places like Arches did not have places to eat, so make sure you pack your cooler with drinks and food for the day (or more if you camp). In Moab, they have grocery shops like The Village Market where we stocked up on water, drinks and bulk items and the Moonflower Community Coop had some more unique items.

The Cowboy Grill: For dinner we eat one night at our hotel, Red Cliffs Lodge, scenic restaurant The Cowboy Grill. The meal was great and the back patio looked out over the Colorado River and the Cliffs across the way, quite stunning. It looked like you are in a western movie. Call ahead though, you likely need reservations and it is about 17 miles from Arches, but the route to go there goes along the Colorado River on Scenic By Way 128 where the hotel is located.

Want something more low key check out the food truck park. However, the place I most enjoyed was Trailhead Public House and Eatery.

Thai Bella was also recommended and there were various restaurants in the area, but this met our needs for a few nights. I did make sandwiches the other days, being tired from the hot summer days and all the fantastic hiking. There are also some great coffee and donut shops in the area. They do have Starbucks and other convenience store coffee, but a few of my favorites were:

There are also some national chains like McDonalds, Denny’s etc. and there is a Dollar Store for some quick needs.

While camping is a popular option, Moab has various lodging opportunities including national chains, as well as Vrbo, Airbnb, etc. But I would say you may want to make a reservation during prime times, in the summer it was pretty busy. You will find lodgings for all budgets, since there is camping on BML land, various campgrounds at the parks, and national chains, etc.

Red Cliffs Lodge Red Cliffs Lodge is such a unique setting on the Colorado River modeled after a lodge in the Great Tetons. It is located at Post 14 on the Scenic By Way 128 that runs along the river. The riverfront Lodge has rustic looking suites and cabins, restaurant, pool area, and events room, plus a museum regarding the history of movies made in the area. Our suite had a great view, its’ own kitchen/living area and while it had a rustic charm it did have a/c and all the comforts of a relaxing hotel. It was a great respite after hiking and you can see the horses on the ranch.

The restaurant in the lodge and cabins have stunning views, including the 2,000 ft. Red Cliffs. Again, it is like walking into a movie. Reportedly the cliffs the you see across the river is where the car from Thelma & Louse go off the cliff. Even the drive to the Lodge was stunning as you drove along the water to this amazing view. Make sure you make reservations though, it is a little drive from the downtown but well worth the drive.

For options in town check out Comfort Inn Suites which has a nice suite style accommodation with a kitchenette. This was perfect to sleep close by to both Arches National Park and Canyonlands National Park. It was also located close to the Main Street of Moab, Utah. This is also more budget friendly as compared to the Red Cliffs Lodge.

While I drove into the area on my trip, some fly. Salt Lake City (SLC) is the closest major airport, located 236 miles, or approximately four hours away. The closest airport though is Grand Junction Regional Airport (GJT) in Colorado about 110 miles away, about one hour and 45 minutes driving. There are some other smaller airports in the area with limited service though. Canyonlands Field (CNY) is 11 miles from the park entrance, but they may have limited service.

If you drive, I-70 is the closest major Interstate. Amtrak’s California Zephyr line goes to Green Junction in Utah and Grand Junction in Colorado, that are 45 miles and 110 miles away, respectively, from the park entrance. Greyhound buses also service these two cities.

Moab was another great surprise. I would plan to spend at least 3 days depending on what you want to accomplish, like the various hikes in the parks, etc. While it was a smaller town, it was a great break from the hiking and gave another unique southwestern town feeling. The folks there were quite nice and welcoming. Just plan ahead since it is a drive to other larger towns. Utah is great and often referred to the Outdoor Capital of the world where you can visit national parks, go white water rafting, horseback riding, and take in majestic views.