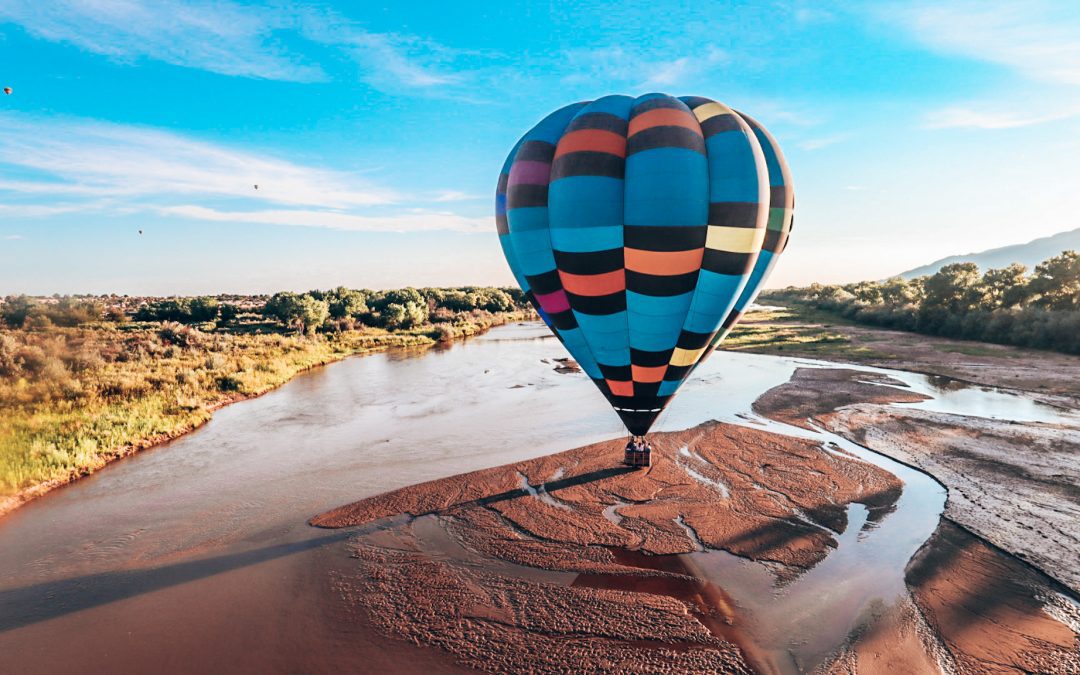 Albuquerque, or ABQ as some say, is such a unique place to visit with its’ Mexican and Spanish flavor, architecture, and gorgeous views of Sandia Mountain and the lovely valley with the Rio Grande River. Most may recognize the city from the best hot air ballon fiesta in the world- Balloon Fiesta Live!  My enchanting Hot Air Balloon Tour was the pinnacle of my stay here, and if you come here it is something not to be missed.

ABQ was founded in 1706 and named after a Duke in Spain. Many know it for the awesome hot air balloon festivals with balloons that float between the mountain and valley, flying high above the Rio Grande River. While not the capital, it is the largest city in New Mexico with over 562k people living within the area (and home of the State’s only official Apple Store). Famous Historic Route 66 also goes through its borders and has historic signs noted throughout the town. There are so many cute neighborhoods including the historic town center. The city also great museums touching on parts of history often glazed over such as the National Museum of Nuclear Science and History. Not to mention this is a great city to explore and pair it with a road trip to Santa Fe to get in touch with your artistic side.

One of the best areas to visit, and I quite enjoyed, is the historic old town and downtown square. ABQ was founded in 1706 so this is quite a quaint area filled with artisan shops, museums and restaurants and historic architecture. The area as that traditional Spanish colonial vibe. Artisans are located around the central square with a beautiful Catholic church, San Felipe de Neri.  Originally started in 1792, the adobe church collapsed from heavy rains but was rebuilt the following year. The area is charming with Spanish Pueblo style buildings. One day we visited and many collector cars were parked all around the square.

There are also various coffee shops and restaurants in the area. One of our favorite lunch spots while there was Church Street Café with Mexican, Southwest and American items on the menu. There was the pretty indoor seating, but we chose to eat in the back outdoor area that was quite pretty with nice shaded areas. Another option to in the area is Sawmill Market across from Hotel Chacas where we stayed one night (see Hotels). The Sawmill Market is new and offers a variety of food from local curators, restaurants, bakeries, coffee shops, and bars in a large warehouse type setting with an expansive courtyard. You can dine in the open areas or get your food to go. We really enjoyed morning pastry from Blue Door Patisserie and a latte from Plata Coffee at Sawmill.

Best Things to Do in Albuquerque

After we visited the Old Town and explored Historic Route 66, we knew there was so much more to see in the area and stayed for several nights at Hotel Andaluz Albuquerque, Curio Collection by Hilton.  From here we would have a world class dinner at MAS while doing 3 great excursions the next few days, all while staying in the historic hotel offering a unique historical perspective of the hotel. Over several days we visited Sandia Peak, flew in a hot air balloon with Fly Albuquerque to get a different perspective, and then hiked the famous Petroglyph National Monument,

Ballooning Capital of the World

Each year they have a vibrant international balloon festival in ABQ. While I was not there that week, I had the great chance to fly in a hot air balloon with Fly Albuquerque a family owned and operated business that has one of the few woman pilots, Britney. It was a fantastic ride and great experience as it was my first time. After gathering with the team, we took off to fly through the valley and enjoyed a wonderful view of the area. As we started, the balloon soon was able to skirt over the Rio Grande River, which was so awesome. It was amazing, so quiet after you rise up and just float. After the magnificent ride, the group went to have a celebratory drink and snacks, cheese and crackers in a nearby park to top it off. This is an experience I will never forget. Not to mention I loved that this was a family business run by Britney and her husband Patrick that were perfect at keeping first time hot air-balloon flyers with their nerves by explaining everything and answering all my questions!

Someday I will return to the Albuquerque International Balloon Fiesta that typically occurs in October. Over 500 balloons lift off during the Fiesta and it is considered the largest one to attend. Can’t wait!  After this morning flight we went to explore the petroglyphs.

The monument is run by the National Park Service and serves to protect one of the largest petroglyph sites in North America. The area includes designs and symbols drawn or etched into volcanic rocks by Native Americans and early Spanish settlers over 400-700 years ago. The petroglyphs are located along various paths in a few canyons. While there is no hiking trail at the visitor center there are elsewhere. There is a shorter trail at Boca Negron Canyon with 100 petroglyphs, Rinconada Canyon with a 2-mile loop and 300 petroglyphs, and then Piedras Marcadas Canyon with 400 petroglyphs on a 1.5-mile hike. Last, you can also see cones of the original volcanoes. (I saw the volcanic cones from the hot air balloon too.)

Note that the parking areas do close between 4:30-5pm each day and the area is helping preserve an important part of history of the original Native Americans and early settlers. It was amazing to see. When you do the hike make sure you bring a water bottle and a walking stick. The stick does help for walking, but also if you see something like a snake that other nearby hikers saw (although best to avoid). The Monument areas are such a unique place to visit especially for history buffs.

The tramway allows visitors to reach the peak that stands at 10,368 feet above sea level; the Sandia Mountain itself is 10,678 feet and one of the tallest urban peaks and the tallest in ABQ. The ride is fairly quick taking approximately 15 minutes with enjoyable views of the area. At the top there is a bar/lounge with open seating where we had a latte and there is also a restaurant called Ten 3 (i.e. 10,300 ft. above sea level), but be warned this requires reservations. Either way the views are phenomenal and we enjoyed it. During winter months, there is also skiing and ski lessons on the mountain, but we were there in the summer. It’s also advised to buy tickets for the tramway online since each car has limited capacity.

Last ABQ is 5,312 feet above sea level, thus the altitude does impact some even on the ground. Once you get above 10,000 feet, the altitude may bother some more and a few were impacted by this while we were there. Just remember to breath as you ascend, and if needed, we saw they have oxygen at both the tramway and in the restaurant if you felt bothered by it, but the views were well worth the trip (and a drink at the top).

Albuqerque is home to a lot of filming for shows such as Breaking Bad. For super fans and just those interested there are tours that take you to the filming locations around Albuqeurque for Breaking Bad. I think it is pretty genius that they use an RV to get around. It looked fun, but I sadly missed this opportunity but I love leaving things

Hotels and Where to Stay in Albuquerque

There are many hotels and B&Bs located in the area at various price ranges. Two that I have had a great stay and recommend include the classy Hotel Chaco and Hotel Andaluz as discussed below.

Opened in 2017, Hotel Chaco is a luxury hotel with 118 stylish rooms with city or Sandia Mountain views with an outdoor pool and roof top restaurant. Level 5 restaurant is located on the roof with great views of the area and is located across from Sawmill Market in Old Town area. The hotel is contemporary, inspired by architect and ancient civilization of Chaco Canyon, a UNESCO World Heritage site in the area. The modern hotel has some lovely shops on the lower level and it was easy to walk across the street to get some snacks/food by local purveyors in Sawmill. Hint, if you want to eat at Level 5, I recommend making a reservation.  This sleek, contemporary restaurant also has a great outdoor lounge (with views of the area). The next day we spent some relaxing time by the pool.

Hotel Andaluz was originally built in 1939 and was one of Conrad Hilton’s original hotels and the hotel is included in the Historic Inns of America directory. The hotel was at one time the tallest buildings in Albuquerque and the first in the state with air conditioning, but don’t let age deter you. The hotel underwent a massive $30 million-dollar renovation with luxury décor influenced by the Spanish Andalusian region, with Moroccan touches. Some of the beautiful craftmanship and materials were restored to its original glory. The hotel is environment friendly, with LEED Gold status for its sustainability. The corner room we occupied was inspired by its original era of the 20’s-30’s, with a great sitting / TV area. Hotel Andaluz is located near the convention center downtown and about two miles from the old town.

For dinner at the hotel we went to MAS Tapas Y Vino, a full-service restaurant serving rich and flavorful Spanish inspired cuisine, including fantastic tapas, all inspired by Chef Marc Quinones from Hell’s Kitchen fame and the two-time winner of Best Chef in the City. The food, staff and Chef Marc were all great and it made it such a memorable experience. After eating we went to the Ibiza Urban Rooftop Lounge, located above the restaurant, to enjoy a drink and nice cool breeze after a warm summer’s day at Sandia Mountain. It was great!

We stayed here a few days while enjoying the balloon ride, the Sandia Peak, and visit the petroglyphs to complete our tour of the city. A great location!

The ABQ area had so much to see and do for all the senses to the fantastic cuisine like with Chef Marc Quinones and floating through the sky in a beautiful balloon and tramway. We even got to see some bison on our way to the tramway (an awesome surprise, there was a wildlife refuge on the way). There are also some other great places and restaurants along Route 66 and various neighborhoods, but the above is a great way to spend some time in ABQ. The area seems also great for families to visit (or relocate).  Whatever you reason, it’s a vibrant city; enjoy it!